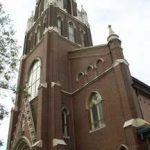 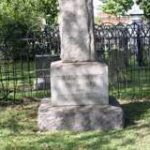 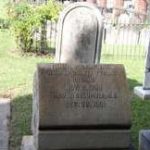 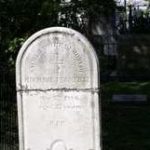 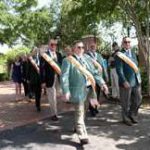 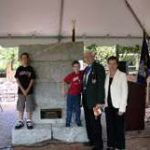 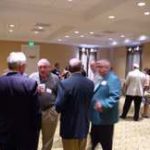 People of the Irish race bear the crown and the cross of thousands of years of known history. A part of the cross was carried right here, at the confluence of three rivers, when they shipped men from Ireland as the indentured workers whose bondage was to be served digging the Columbia Canal. Also, part of the crown is this canal.

The practice of using bondage to move the Irish out of Ireland began soon after the claiming of Ireland by the English monarchy and reached its numerical peak during the Cromwell years in the mid-1600s, when, historians tell us, up to 100,000 men, women, boys & girls were “transplanted” to America and the West Indies as slaves and, the contractual equivalent, indentured servants. The stones stand to the memory of the Irish “leetmen” (a feudal term for those bound to work the land) brought here in the 1810’s and Twenties to build the Columbia Canal.

These Irish leetmen were the reason why St. Peter’s, mother church of the UpCountry, was founded and many of them are buried in its cemetery. Their memorial is built of granite blocks, salvaged from the Columbia Correctional Institution’s Cell Block One that stood for over 100 years a few yards away. In Ireland , their dwellings were likely built from granite as well. The monument forms the letter “I,” beginning the English name for their native land, and also standing for the integrity and industry which they brought to the work they were shipped here to do.

On Friday, September 5, 2008, the guest of Honor, Niall Burgess, Consul General of Ireland, was given a tour of the area including the South Carolina Museum of Art and the Military Museum at Fort Jackson. That evening there was a true AOH Carolina BBQ Reception Dinner with Irish music and step dancers entertaining. The next day, there was a MASS, a ceremony at the gravesites of many of the workers, the dedication of the monument at Riverfront Park, a Celli at Delaney’s Pub and a formal reception at the Columbia Chamber of Commerce.